UPDATE #2: The site has gone live. Check out my first posting.

For the few people that may still be showing up here, I am making my return to blogging. The Republican Party of Virginia has started a blog, which will be receiving submissions from a variety of bloggers. My first post should be going up later today. Currently, my plan is to return on a temporary basis, and I only expect to post a few submissions (all my posts will be submitted to the RPV blog only, no cross-posting) before going back into retirement. But seeing as I figured that I was never going to post here again, never say never.

In the meantime, check out some of the other submissions that have come in so far. The Maistro and Operations/Media Director Tina McArthur both have posted so far. The Maistro has a long history in politics, while Tina McArthur is just starting, but I believe they both have provided a good example of what is to come from the blog. Add the RPV blog to your RSS feed here.

UPDATE: It appears the site has not gone live yet. I have no information currently about when this may happen, but I'll post an update when it does.

Seeing as Ben now thinks my comments register as spam (guess you're having a hard time with the criticism, eh Ben?), I am forced to post this response to Joe Stanley to my blog.

(UPDATE - Apparently, Ben was only banning comments that used the acronym NAMBLA in it, but that is no better. He is ignoring the issue.)

Don't get too excited, this is a one time thing.

Thus, Ben and Joe continue to bring down the value of Virginia's blogging community.

Joe Stanley, you suggest that you believe that the ODBA acts like NAMBLA in only believing in their first amendment rights. You could have released an editorial on this, or wrote a guest piece on a blog, but by registering a site that automatically redirects to another, there is no context to your claims. Instead of appearing that this is a political comparison, it looks like the ODBA is trying to promote something it does not. This was vile, despicable, and deceptive, and there is no reason that anyone within the ODBA should spare you any reprieve. I'm sure you are not looking for forgiveness from us, but make no mistake, this will affect many people outside of the ODBA as well, and I imagine that will include Roscoe Reynolds, who will now forever be tied to this incident; perhaps, this will teach you a little something about karma. While I certainly do not believe in karma on a spiritual level, most often, what goes around, comes around.

And Ben, by encouraging Joe's charade, you only make yourself look worse. Why don't you just go back to doing what you originally did with this blog and simply predict the outcomes of upcoming elections? This blog might actually be worth the server space it takes up then.

I've been thinking about this for a while recently, but I have had to make the tough decision that I will be ending my blogging days. While I will still be around the Virginia blogosphere (sometimes, I cannot help but comment), I am finding that I cannot devote the kind of time that I would like to for The Red Stater. While not nearly as prolific as many other bloggers, I have written more than 600 posts in the last two years, and quite frankly, it starts to feel like I am repeating myself; there are plenty of bloggers who are more capable of doing this than myself.

While I won't be entirely gone, I will leave here with a few parting thoughts.

- Terror is a real threat, and one we will have to deal with for years to come. For this reason, we cannot leave Afghanistan or Iraq any time soon (unless the government of either country tells us that they believe it is that time). Talking with the enemy will not work. Leaving them alone will not work. Ultimately, this can end one of two ways. Either we win, or they do, and there is no middle ground. Many here do not see this as a religious war, but to the radical Islamists, this is a war against all Western Culture, and there is no victory on their side until everything we know and believe is destroyed.

- Global warming is exaggerated. More and more scientists are coming out against it, and even those who believe that it is a concern suggest that most people know very little about it. There have even been suggestions that for many colder regions, it might be of benefit. Until the science has been better refined, politics should stay out.

- When it comes to Hillary Clinton, just say NO! (I knew that saying would come in handy someday). Today, my candidate of choice is Fred Thompson, and I must say I am glad he is not doing the same thing all the other candidates did by starting to campaign so early. Other decent candidates include Duncan Hunter, if he can get a good following, and Mitt Romney, who is far from my favorite but appears to hold a sufficiently conservative record for me to get behind if he wins the primary. Fred Thompson may be the most conservative candidate in the race, and he can be trusted to stand up for America.

As I have said before, this isn't goodbye. I do not have any plans to remove The Red Stater (nor to reveal my identity publicly, sorry folks), as I will continue to comment on other blogs. Also, I will not rule out coming back (though do not expect that to be anytime soon). But for now, The Red Stater will remain without updates.

Remain strong Virginia. Things may look down now, but life is filled with ups and downs, and I am sure that Virginia will one day again be the Red State I know it to be.

Sic Semper Tyrannis has returned after 14 months of downtime. I guess Addison and Lighthorse Harry could not stay away forever. And this time, they've brought along a few others, including SWxSE, Norm Leahy, and Mason Conservative, not to mention a new site. This is good news for the Virginia blogosphere, as SST was always a reliable source, and the contributors are of the highest caliber. Welcome back SST, this is a good day in Virginia.

Honoring those who protect us

This Memorial Day, remember all that America's troops have done (and are doing) for us. They can never be thanked enough. 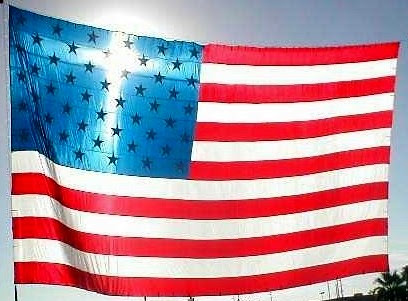 An Early Congratulations to UVa Grads

The University of Virginia writes her highest degree on the souls of her sons. The parchment page of scholarship-the colored ribbon of a society-the jeweled emblem of a fraternity-the orange symbol of athletic prowess-all these, a year hence, will be at the best mementos of happy hours-like the withered flower a woman presses between the pages of a book for sentiment's sake.

If you live a long, long time, and hold honesty of conscience above honesty of purse:

And turn aside without ostentation to aid the weak;

And track no man to his undeserved hurt;

And pursue no woman to her tears;

If you live a long time and, keeping the faith in all these things hour by hour, still see that the sun gilds your path with real gold and that the moon floats in dream silver;

Remembering the purple shadows of the lawn, the majesty of the colonnades, and the dream of your youth, you may say in reverence and thankfulness:

"I have worn the honors of Honor, I graduated from Virginia"

And apparently, Bodo's loves my photos. Mr. Bodos himself, John Kokola, recently asked me if he could use photos that I had taken from my graduation last year on his website, and I gave him permission to do so. Now, one of the photos is on the front page there. I am certainly no professional photographer, so it is pretty cool to see one of my pictures being used by Bodo's, one of my favorite places to eat in Charlottesville. Thank you Mr. Kokola for a few of my best memories down in C'ville.

This three-game series starts tonight. I know a lot of people here got excited about a new team moving in, but I am staying loyal. Go O's!

Not if you look at the numbers. 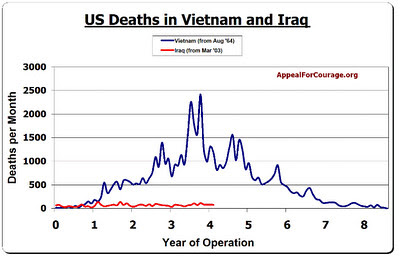 It is interesting to note that, more or less, U.S. deaths in Iraq have been consistent from month-to-month. Vietnam peaked at this point, and at are far higher number than Iraq has. In fact, the two bloodies months in Vietnam produced more deaths than all of Iraq. While I in no way mean to lessen the losses we have suffered, this is at least one more piece of evidence that shows that Iraq is far from a quagmire. Iraq will take time, but so did Germany and Japan, countries where we still retain troops. If we had devoted that time to Vietnam, perhaps they would be on their way out right now too.

However, my real concern with this graph is if we someday find ourselves embroiled in another war on the scale of the World Wars. The military is clearly ready to engage in their duties, but the American people are not ready to get behind them. If we find ourselves having to deal with China in a couple decades, what will happen? Clearly, it is time to stand with the troops and let them finish their job; we can only call Iraq Vietnam when the people, not the soldiers or the government, give up.

This seems to be the mantra of the Democratic party these days. A year ago, Democrats were in the middle of a big hissy fit when Republicans were getting in the way of filibusters. So it comes as no surprise that Democrats attempted to do the same sort of thing.

The change has since been withdrawn it appears, but Congressional Democrats should be ashamed. They first appear as hypocrites. Then, they appear weak giving up on this proposal, which they should have never offered in the first place. And most of all, their approval rating is in freefall, now reaching levels that are even lower than that of the President (this could make the 2008 elections something of a peaceful coup with many incumbents competing in danger of losing their seats).

But I guess it should be no surprise that Democrats in Congress would stoop to this. They are clearly learning from their constituents.

Taking their ball and going home.

Richmond Democrat, Not Larry Sabato, and Raising Kaine are all tired of not being ranked the most influential blog in Virginia by BNN, so they are whining about it. What I want to know is which is more important; being influential or having it reaffirmed for you? Seems to me that these three blogs will only serve to hinder their efforts; they will be less influential having fewer links their way.

Then again, who am I to complain? I now have a better shot of being in the top twenty!


See What We're About
email to join